March 9, 2012 Posted Under: News from New Orleans No Comments

Historians, war buffs, and boat and airplane enthusiasts will have a great reason to come to New Orleans next month for Navy Week NOLA.

Navy Week NOLA (April 17-23) is the kick off to three years of international events that commemorate the bicentennial of the War of 1812. They will end in 2015 with the 200th anniversary of the Battle of New Orleans.

Tall ships and modern warships will be docked for a week along the Mississippi River’s east bank, including the Coast Guard’s Eagle, Indonesia’s Dewaruci and Ecuador’s Guayas. France is sending its frigate, FS Germinal. England is sending the frigate HMS Montrose, and Canada is sending the HMCS St. Johns, also a frigate. 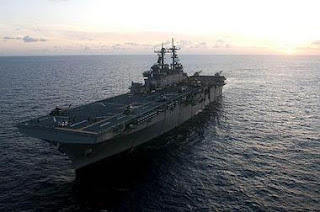 The U.S. Navy’s flagship for the visit is the USS Wasp (pictured here), an 844-foot amphibious assault ship used to haul Marines and aircraft to war. The guided missile destroyer USS Mitscher, guided missile destroyer USS Gettysburg and the frigate USS De Wert also are planned. All will be greeted by 21-gun salutes, fired from the site of the closed Naval Support Activity in Algiers.

At New Orleans’ lakefront there will be two days of air shows over Lake Pontchartrain, featuring the Navy’s Blue Angels as the headliner and other military acts. The show’s center will be the UNO Lakefront Arena. Public viewing will be along the lakefront, from the UNO Research and Technology Park to the Inner Harbor Navigational Canal.

Admission to the events is free. Ship tours will be available daily, with mornings reserved for school groups and afternoons for the general public.

While the Battle of New Orleans is considered the war’s largest land battle, the War of 1812 was mainly a large Navy battle, serving “as the Navy’s first trial by fire,” said Rear Adm. Jack Scorby, commander of Navy Region Southeast.

Stay at the Grand Victorian Bed and Breakfast in the Garden District, tour the ships and the World War II Museum for a historical weekend to remember.