It’s Summer and it’s HOT in New Orleans, but August is going to be a delicious month! Celebrate this time of year by dining during COOLinary (a combination of “cool” and “culinary”). This event, August 1-31, celebrates the city’s rich and unique culinary landscape all around town. Not a local? No problem. We’d love to have you visit and indulge in this exciting season.

Over 35 participating restaurants across the city feature specially curated and priced two and three-course meals – anything from brunch, dinner and lunch items. Each restaurant offers:

Menus include everything from internationally-inspired cuisine to classic New Orleans fare, reflecting the history, fabric and culture of the city. Restaurants include those that have been in the city for generations, as well as up-and-coming eateries.

The Grand Victorian Bed & Breakfast recommends the following 2 restaurants which are located close to the B&B: 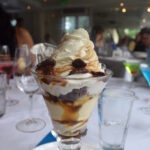 Why did the COOLinary event come about?

As everyone knows, New Orleans is hot in the summer. Also, with the school season beginning, there are fewer tourists. Thus, restaurants have fewer customers. Originally, this event was created to entice locals to come out and eat, However, it has grown into such a popular event that tourists come to town just to participate in one of the best events of the summer in NOLA.

“Back in the bad old days, the summer months were so bad that lots of places did drop down to skeleton crews or close,” said Kristian Sonnier, Vice President for Communications and Public Relations for New Orleans & Company. “We’re no longer there. There’s an increased demand for the New Orleans experience, and the hot summer months don’t keep people away the way they used to.”

And when you’re not eating, there’s lots of other things to do in NOLA. Book your room now at the Grand Victorian Bed & Breakfast and we’ll keep you so busy, you’ll forget the heat!